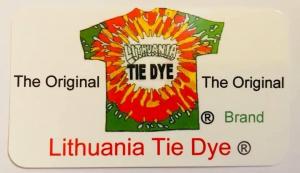 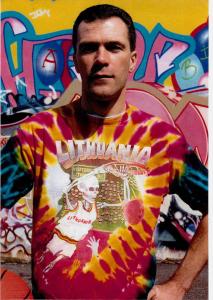 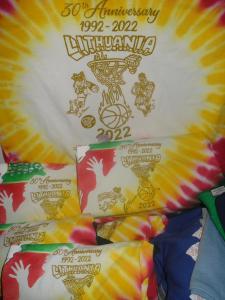 Vintage Editions of the T-Shirts sell for Hundreds of Dollars. 30 Year Milestone for the Lithuania Tie Dye® Skullman® Brand is due to its Collectibility Factor.

The Iconic Apparel is a solid brand with an amazing 30 year longevity. Still a most sought after brand by collectors after three decades of marketing and sales.”
— Mike Thompson
NEW YORK, NEW YORK, UNITED STATES, November 25, 2022 /EINPresswire.com/ -- The Lithuanian Tie Dye® Skullman® Uniforms became an international household icon when seen on the world stage of the 1992 Barcelona Summer Olympics. They were created by a New York fashion designer so the Lithuanian Olympic Men’s basketball team could have something fun to wear during the Olympics. But they ended up wearing them at the bronze medal ceremonies on an international platform for the world to see.

Immediately the public wanted to know where they came from and where they could buy one. The way-out warm-ups were created by New York art director and fashion designer Greg Speirs. They started selling and became a hot collectible. Speirs saw it as great opportunity to help the team and chose to donate all of what would have been his profits to the team. Instead of receiving any royalties he let 100% go to the team, at that point becoming the major funder of the team.

The story was also documented in the in the 2012 movie "The Other Dream Team" highlighting Lithuanians’ experiences behind the Iron Curtain, where elite athletes were subjected to brutalities of communism. Lithuania’s basketball stars shared a common goal – to utilize their athletic gifts to help free their country. Aside from the hardships on the road to the 92' Olympics, the film celebrates the artist’s famous Skullman tie-dyed uniforms, now an historic piece of Olympic fashion history.

Listen to the interview:
http://www.gregspeirs.com/greg-speirs-audio-interview-by-the-other-dream-team-documentary-film/

Skullman was also enshrined in the Basketball Hall of Fame in 1993:
http://www.lithuaniatshirt.com/basketball%20hall%20of%20fame.htm

"The 1992 Lithuanian Basketball Team represents what happens in freedom...people excel. Winning the bronze medal was not only a victory in sports but symbolized triumphing over communism itself. Skullman® symbolized coming up from the ashes. It's not a dead skeleton at all but Skullman® is a live skeleton rising from nothing, full of life and reborn. It's about life and rebirth. It’s about freedom and free enterprise." added Speirs.

About the Property: The brand is an independent property created by the designer Greg Speirs and is not part of any other entity. The brand stands alone as a separate independent property owned by the designer. All licensing rights originate from and belong to the Licensor and the creator, Greg Speirs.
Marketed and sold consistently for 30 years, the brand’s collectability and the continuous marketing through Skullman.com is the reason for its popularity and longevity. The 2022 Official 30th Anniversary Lithuania Tie Dye® Tees and Hoodies are available from www.skullman.com

“The story was a major news event impacting popular culture, taking its place in history. His creation of the iconic apparel had a major influence on the future of sports fashion, changing the way it was perceived and viewed and looked at. We're grateful to Greg for that. The Tie Dyed Slammin® Skullman® became a legendary household icon.” said Mike Thompson of Slammin Sports®.