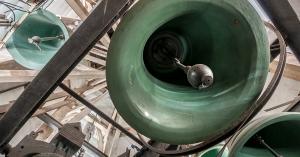 A canopy of sound will ring out over the nation’s capital as tribute is paid to the 160th anniversary of the Emancipation Proclamation.

Invite a friend. Meet a neighbor! And take a moment to enjoy the bellowing tolls that bring us all a bit closer together. That’s the meaning behind our motto: civitas resonet. Let the community ring!”
— Paul Ashe, Director, National Bell Festival

WASHINGTON, D.C., USA, November 25, 2022 /EINPresswire.com/ -- This January 1, 2023, the fourth annual National Bell Festival returns to ring in the New Year. The festival is expected to be the most resounding yet, with bells ringing across Washington, D.C. at the festival hub; across America in a coast-to-coast ringing event; and across at least five continents in the ever-popular “Ring around the World.” Thundering bells will unite communities in a global display of peace, hope, and togetherness for the year ahead.

The festival kicks off with the “Ring around the World” – inviting carillons to toll the stroke of midnight on New Year’s Eve and then play that beloved Scottish tune, Old Lang Syne. The sound will cascade from continent to continent as midnight reaches subsequent time zones. Change ringers will augment the tintinnabulation by ringing out the old and ringing in the new with peal attempts the world over.

The tribute to bells reaches far and wide. Whether single bells tolling in the nationwide ringing event, grand carillons playing rich music over the rooftops, handbell choirs creating luscious hymns, or syncopated rings of peal bells resounding from above, New Year’s Day is jam-packed with opportunities to hear bell ringing, climb a bell tower, and meet a neighbor.

At noon on New Year’s Day, the National Bell Festival will be announcing the construction of a new bell tower in Washington, D.C., at a special press event. Then, the day continues with a poignant moment on the steps of the Lincoln Memorial to commemorate the exact 160th anniversary of the Emancipation Proclamation. A historic bell cast in 1863 will be tolled 160 times to honor the work of abolitionists and antislavery activists.

Bell ringing will take to the skies with performances at Washington National Cathedral and the Old Post Office Tower, where change ringers will attempt two full 3.5-hour peals, and at the Basilica of the National Shrine of the Immaculate Conception, where Dr. Robert Grogan will enchant festivalgoers with a community carillon recital from the soaring Knights' Tower.

Nationwide bell ringing begins at 2:00pm Eastern on New Year's Day, when cathedrals and churches, community organizations and historical structures, national parks and memorials, and Americans from coast to coast are invited to gather and contribute to the sound.

This year, the National Bell Festival is highlighting the bell ringing traditions of the United Kingdom as part of a “spotlight nation” series. Punctuating the day will be a concert arranged by the handbell choir Virginia Bronze, featuring musical selections from the British Isles at the historic St. John’s Church, Lafayette Square.

Throughout the day, giveaways (like the cozy BellFest beanie) and surprise appearances will make for a fun, safe, and friendly atmosphere for the whole family. All events are free, outdoors, and open to the public. Registration in advance is encouraged by visiting: Bells.org/Events

The National Bell Festival takes as inspiration a time when a bell would be the very heartbeat of a community – a time when, if a bell tower was ringing, the village would gather, discuss the news, and plan a path forward together. Whether a war or wedding, festival or fire, the simple act of bell ringing would signal community togetherness, collaboration, and collected potential – values the National Bell Festival hopes to inspire as it gets more bells ringing in more places.

An all-volunteer team fundraises throughout the year to restore historic bells and commission new bells to be cast, keeping alive the thundering voices in bronze. For additional information on the National Bell Festival, including ways to get involved or to register your own tower’s event, visit Bells.org to read more. The festival promises to be a wonderful celebration of bells, music, community, and history.