CHARLESTON, WV (WVNS) – There are a lot of missing people in the United States. As of December 31, 2021, the National Crime Information Center’s (NCIC) database contained 93,718 active missing person records. But how often are they found?

West Virginia has 143 active missing persons cases as of October 2022, with 92 recorded resolved cases according to the National Missing and Unidentified Persons System (NamUs) database.

Many people who go missing do so intentionally. Its hard to believe, but plenty of research suggests that pushing factors like trauma, abuse, financial trouble, etc. are a primary reason people would ‘choose’ to disappear.

According to the NamUs database, there are 600,000 people declared missing every year. Alongside that statistic, there are 4,400 unidentified bodies discovered every year.

An NPR interview with Todd Matthews, director of communications for the National Missing and Unidentified Persons System in 2013 delved into the nature of missing persons reports and found the same thing.

“You know, the missing touches everybody, I think. In 2012, we had 661,000 cases of missing persons; and that’s just from that one year. Very quickly, 659,000 of those were canceled. So that means those persons either come back; in some cases, located as deceased persons, maybe never an unidentified person; or just a total misunderstanding. So at the end of 2012, of those 661,000 minus the canceled, we had 2,079 cases that remained at the end of the year as unresolved.”

Mercer County WWII vet vowed to kill every Nazi he saw; and he did

This is much the same of missing persons cases today. People often are found very quickly and the overall percentage of people who stay missing is close to 1%. That’s still a large number though, with 6,000 out of 600,000 people going missing in a year staying that way.

A report published by Statista.com’s research department compiled past cases and showed that fewer missing persons cases are happening today. 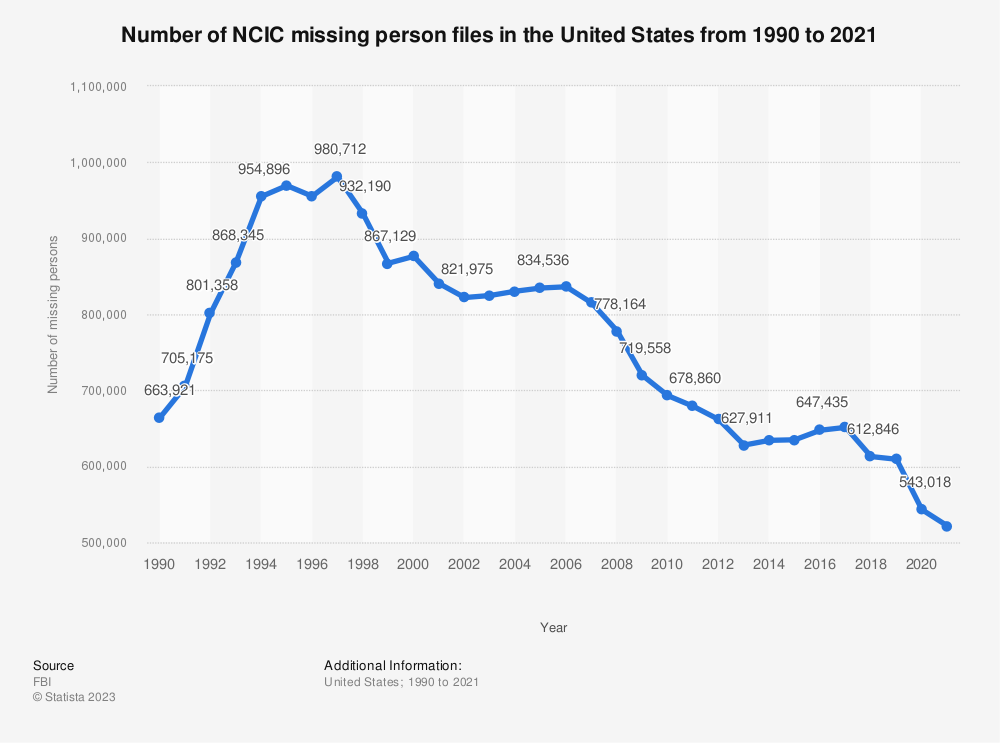 2021 saw the least ever number of missing persons in United States history. Hopefully this trend continues, and the families of people who go missing have less and less to worry about.

Kentucky coal miner celebrated as viral ‘father of the year’

For people who are still missing after the one-year mark or even longer, we can never give up hope.

14 traffic fatalities in Virginia over Thanksgiving

Best tools to give as gifts

Best smart home gifts for everyone in your life